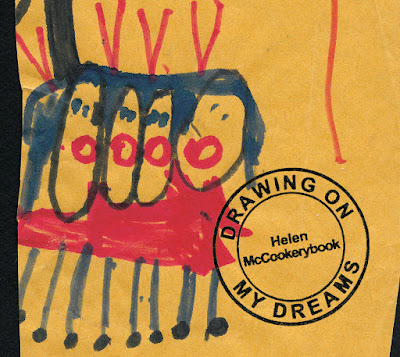 As regular readers will know, North London singer/songwriter Helen McCookerybook is no stranger to this blog.

The punk and post punk alumni of Joby and the Hooligans, The Chefs and Helen and the Horns has been prolific in her output these past five years or so, with albums such as Green and The Sea standing strongly alongside 2020's concept 7" album, Pea Soup.

With Drawing on my Dreams, McCookerybook has created an album that is unmistakably her own but which also nods to one of this years key musical themes: Minimalist introspection fuelled by home recording and home producing.

Lockdown has obviously shaped a number of artistic and creative decisions musicians have made over the past two years, hence the increase in introspective observation, acoustic guitar driven songs and Logic and drum machine orientated tracks. The other side of the coin of course is the "Wooh! Hedonism and glow sticks!" school of thought, leading to a Mercury Music Prize shortlist that was (in the main) relentlessly upbeat this year. The judges clearly signalling with their selection that they were done with soulful introspection after two years of being sat indoors in a onesie with only a screen for company, thank you very much.

I mention this only because while Drawing on my dreams was home recorded, home produced and contains a number of songs that are fairly introspective, it doesn't feel like so much of a departure from McCookerybook's previous works as, say, Florence + The Machine's Dance Fever or Harkin's Honeymoon Suite both did for those artists. I mean, album closer 'Dear Life' shares a similarly self depreciating sense of humour as Florence + The Machine's 'Girls Against God', but the sound of exasperation north of the river is more pastoral and gently wry than Welch's weary-but-seething-despair over lockdown life in South London.

We open with the gentle finger picking minimalism of 'Beachwalk', where the vocal creates the melody as McCookerybook sings of the healing powers of a good sea walk and the serendipity of random shore discoveries away from the madness of the world.

It is followed by the wistfully pretty 'All I Want', an ode in which she seeks happiness not for herself, but for a friend who is tormented by shadows. It's the kind of singularly stylish and classic sounding song that would have suited both Kirsty MacColl and Doris Day.

Third song 'Wake Up' has choppier guitars and more of a political edge to it, equating as it does the boiling of the coffee with a desire for social change. McCookerybook urges the listener to feed their soul as the violin (provided by The Raincoats Anne Wood) twines in and out of the choppy guitar and sharp/sweet vocals like a smoky cat.

In 'Amazonia', she returns to a theme she's often blogged and spoken out against: Worker exploitation. The song begins with references to a Bangladeshi garment factory fire, possibly the one in Dhaka that happened last year, but probably also the one that happened in the same region in 2012. Apple's factories in China, which relied on child labour, and "the deep dark depths of the fulfilment centre" of Amazon hell are also mentioned. The song is a lyrically skilful analysis of worker exploitation that has the same kind of restless energy of post punk intelligentsia such as Young Marble Giants. It also harks back to The Sea's title track (a scathing take on the refugee crisis) in the thoroughness of its assessment.

Equally fierce is 'Pandora', a reference to the unfortunate Greek woman with the box and the ways in which the worlds problems are used as a stick to beat women with.

More subtly political it seems is the deeply touching 'After the Storm', which has a real sense of gentle catharsis and a world taking a breath following the defeat of Donald Trump in the 2020 US election. The song has a pretty pastoral melody and a lovely wistful vocal and is one of my favourite tracks, alongside 'Wake Up'.

'Woodwide Web' is a welcome slice of gently strummed and sung whimsy inspired by the natural world, which showcases McCookerybook's eye for detail and sense of fun. The lyrically poetic 'Little Egret' works on a similar level and shares a similar sense of curiosity and wonder.

With 'Coffee and Hope' the upbeat tune and lyrics are set off by the choppy guitar and quiet vocal as our author sips coffee and hopes for a better world, a feeling echoed by closing track 'Dear Life'.

Perhaps the most musically ambitious track though is 'Things Like This'. The song features hypnotic short guitar chords alongside a more finger picking style of playing and there is a catchy chorus of "Things like this don't happen to people like me" which sits nicely alongside the crisp drumming of The Go-Between's  Lindy Morrison. Emma Goss also features on double bass and the overall feel is of a slice of classy 60s beat pop.

With Drawing on my Dreams McCookerybook has signalled a new level of sonic independence as well as a willingness to experiment. The result is a stylish and clever album by a singer/songwriter who is perfectly at ease with herself and her work.

Drawing on my Dreams is available to buy via Bandcamp

Email ThisBlogThis!Share to TwitterShare to FacebookShare to Pinterest
Labels: Drawing On My Dreams, Helen McCookerybook

Cazz Blase
Freelance journalist, writer and blogger based in the UK. Specialisms are public transport and women and music.