This live footage of Liines playing 'Be Here' live at Theatron Pfingstfestival in Munich is basically the only bit of footage of the band on YouTube that wasn't filmed on someone's phone. Luckily, it's also pretty damn good. Liines' Zoe McVeigh has been recording some live tracks in lockdown, including this very strong version of PJ Harvey's 'A Place Called Home', and the band have made a YouTube playlist of clips of them filmed on members of the audience's phones, which (if you fancy a deep dive) you can watch here.
Posted by Cazz Blase at 07:00 No comments:

There isn't an awful lot of video of Ms Mohammed on YouTube, especially live video. The live sections of this particular video are a little bit muffled, sound quality wise, but it's enough to give you an idea of how good she is. In a similar vein, Ms Mohammed also did a talk for TEDX London in 2019, on the theme of authenticity over assimilation, and she and played two songs as part of that. You can watch the TEDX London talk here.
Posted by Cazz Blase at 01:00 No comments:

This brief clip of Gaptooth performing at The Dublin Castle in 2012 is the only live footage of Gaptooth on YouTube, and while it's a bit scrappy, it gives you an idea of her sound. You can subscribe to her YouTube channel here.
Posted by Cazz Blase at 07:00 No comments:

Penfriend - Everything Looks Normal In The Sunshine (with lyrics)


Because Laura Kidd had only launched Penfriend back in May, this is the only song available at the moment. There is a playlist, on the She Makes War YouTube channel, of various live songs by Laura as She Makes War though, which will give you an idea of her previous sound.
Posted by Cazz Blase at 01:00 No comments:

Penfriend: The new project of Bristol based Laura Kidd, previously known as She Makes War, Penfriend had the bad luck to launch just prior to Covid-19 really taking hold, as lockdowns began to be imposed around the world. The initial two tracks Laura let loose into the world before all of this happened sounded promising though and, as She Makes War, she was a force to be reckoned with live. You can find out more here.

Gaptooth: Bristol based Hannah Lucy has been making music as Gaptooth since 2005. Since then, she's released two albums of increasingly slick agit prop synth pop, most notably the song 'Ladykillers' and her collaboration with Sisters Uncut, 'They Cut We Bleed'. She is as much an activist as a musician, and has both performed and acted as steward at the annual Loud Women fest in London. You can find out more here.

Ms Mohammed: London based Dana Mohammed has been making ferocious garage punk with queer feminist edges as Ms Mohammed since 2017 but, as this interview will show, her impressive music and activist backstory extends much further back than that. Her music has been praised by Iggy Pop on his BBC 6Music show, and last year she did a talk for TEDX London on the theme of authenticity over assimilation, which you can watch here. She's also on Bandcamp.

Liines: Manchester's tightest "alternative post-punk band", Liines, have been slowly building up their fanbase over the past five years. They released their debut album, Stop-Start, in 2018 and supported Sleaford Mods on their UK tour last year. You can find them on Bandcamp.

Dream Nails: This band of London punk feminists formed in 2015, and have been making catchy but angry punk pop tunes ever since. Their hotly awaited digital album is imminent. You can find them on Bandcamp.

Big Joanie: "We're like The Ronettes filtered through 80s DIY and riot grrrl with a sprinkling of dashikis" says their Bandcamp biog. Musicians, writers, and activists all, the London based Big Joanie supported Sleater-Kinney on a number of their UK dates earlier this year. Their debut album, Sistah's, was released in 2018. Their Bandcamp is here.

The Raincoats: London punk legends The Raincoats have been writing idiosyncratic masterpieces since 1977. Their first three albums were all re-released in the 1990s thanks to interest from Kurt Cobain (who was responsible for the bands reformation in 1993) and Sonic Youth, and they have continued to record and perform, on and off, ever since. You can find out more here.

Bikini Kill: The return of Bikini Kill (along with Gossip) was one of the more unexpected but highly exciting reformations and live reunions of 2019. This iconoclastic punk band originally formed in 1990 in Olympia, Washington, and were key players in the riot grrrl scene in Olympia when it began in 1991. They split up in 1997, but clearly felt they were needed in 2019. You can find out more here.
Posted by Cazz Blase at 07:00 No comments: 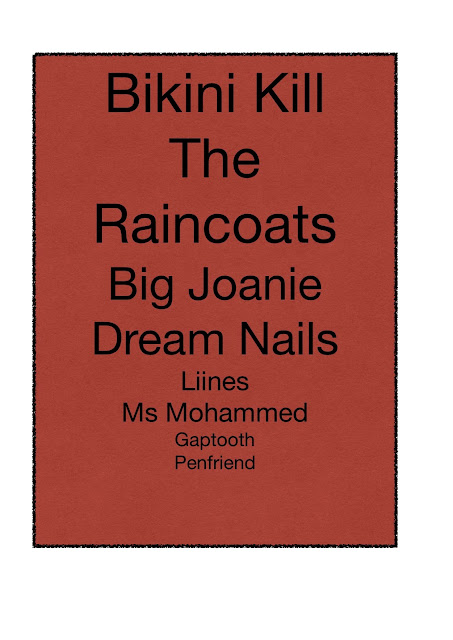 This is a jubilant Lizzo performing 'Juice' live at Glastonbury in 2019. It's also well worth watching the clip of 'Good As Hell' from the same set, although the full set is not available on YouTube alas. As with many other Glastonbury sets that were filmed, it is possible, with care and patience, to re-assemble the full set from the individual song clips on YouTube. Lizzo's 'Tiny ass desk' set for NPR is available to watch here.
Posted by Cazz Blase at 07:00 No comments: